The iOS Developer Community Survey shows that Model-View-ViewModel (MVVM) is the second most popular architectural pattern for designing iOS apps. It makes a good reason to study the state of modern MVVM with SwiftUI and Combine.

In this article we’ll cover:

MVVM has its roots in the Application Model pattern, invented in the Smalltalk engineering realm in 1988. The primary goal of the pattern was to split two kinds of logic, the presentation, and the business logic, into two separate objects: the Application Model and the Domain Model, respectively.

Microsoft introduced MVVM in 2006 for designing and implementing desktop client applications with the Windows Presentation Foundation (WPF) UI framework. With MVVM, Microsoft pursued the goal of standardizing the way WPF applications are developed. The pattern intended to leverage the power of the WPF framework, such as data binding.

According to Microsoft, MVVM is a specialized version of Fowler’s Presentation Model. Martin Fowler even claims that they are the same.

The Purpose of MVVM

The goal of MVVM is to separate the business and presentation logic from the UI. It improves testability and maintainability, which are often the key success factors of an app.

To achieve its goal, MVVM minimizes decision-making in the views and moves view state and behavior into the view model. This way, the view becomes passive:

Such a design allows us to test presentation logic in isolation from the GUI stack.

MVVM is the UI pattern. As with the most rich client systems, this is where a large part of your iOS app’s codebase sits. SwiftUI views, UIKit views and view controllers, storyboards and xibs all belong in here.

MVVM provides a set of guidelines on:

MVVM can be broken down into the three components that follow a strict dependency rule:

Dependencies are organized in the following way:

Note that the flow of the data is different as compared with that of the dependency:

That is, the data flows in both directions. It starts with a user interaction, which is handled by the view. Next, the view passes interaction events to the view model. Then the view model translates the events into CRUD (create, read, update and delete) operations upon model and data.

The reverse flow is also the case. The model fetches data from the backend, or a database, or any other source. Next, the model passes data to the view model. Then the view model prepares data in a form that is convenient for the view to consume. Lastly, the view renders data onto the screen.

Now let’s discover the roles of the MVVM components.

The ViewModel represents the data as it should be presented in the view, and contains presentation logic.

The responsibilities of the ViewModel are:

The ViewModel is independent of the UI frameworks. Think twice if you are about to import SwiftUI or UIKit inside your ViewModel.swift file.

The View renders the UI and passes user interactions forward. It has no state and does not contain any code-behind that interprets user actions.

The responsibilities of the View are:

The Model is the software representation of the business concepts that earn money or bring any other value to your customer. It is the primary reason why your iOS app is actually written.

Although MVVM has the Model as a part of its name, MVVM does not make any assumptions about its implementation. It can be Redux or a variation of Clean Architecture, like VIPER.

The Modern State of MVVM

The following techniques shape what I consider to be the modern state of MVVM in Swift.

The single most important aspect that makes MVVM viable in the first place is data binding.

Data binding is a technique that connects the data provider with consumers and synchronizes them.

Using the data binding technique, we can create streams of values that change over time. Functional Reactive Programming (FRP) is a programming paradigm concerned with data streams and the propagation of change. In FRP, streams of values are first-class citizens. It means that we can build them at runtime, pass around, and store in variables.

The Combine and SwiftUI frameworks provide first-party FRP support, which allows us to seamlessly reflect view model changes in a view, and remove the need for writing code in a view model that directly updates a view.

Many applications of the MVVM pattern use two-way bindings to synchronize a view with a view model. Explanations of such an approach are often accompanied by an example of a counter app. Although it works fine for two data streams – counter increment and counter decrement – the two-way binding approach does not scale well when applied to production-like features.

Let’s demonstrate the problems by example. Here is a sign-up screen with just four states: 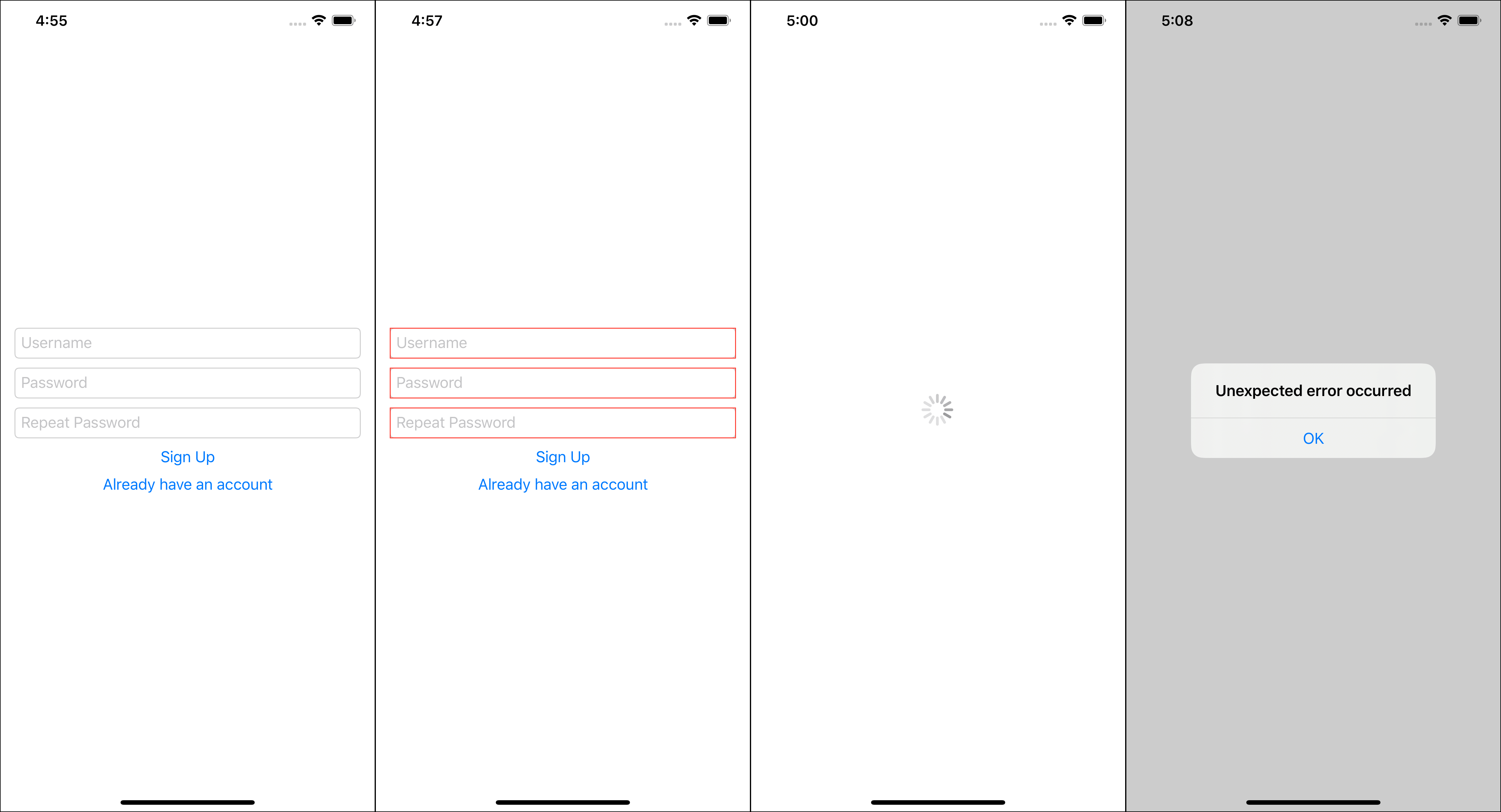 If we wish to implement it with MVVM and connect a view and a view model with two-way bindings, it will likely look next:

Every arrow represents a stream of values. The streams are also connected with each other:

The figure still has some details missing. Typically, in a production app, you will send network requests, and allow your users to login with identity providers, like Google or Facebook. The two-way binding approach gets out of control very quickly and eventually ends up like this:

The second problem with the two-way bindings is error handling. Out-of-the-box, the Combine framework does not provide a concept of a never-ending-stream-of-values, like RxSwift Relay. Therefore, when an error occurs, it will terminate the whole stream and potentially leave your app’s UI unresponsive. Although you can recreate Relays in Combine on top of PublishSubject or CurrentValueSubject, it may not be the right way to go for the reasons explained in the next section.

UI as a State Machine

Another significant issue that falls out of the two-way bindings approach is state explosion.

What is a state? The state of an object means the combination of all values in its fields. Therefore, the combinatorial number of UI states grows with factorial complexity. However, most of such states are unwanted or even degenerate.

There are even more problems with unexpected states:

The solution is to work out all possible states and all possible actions that trigger state transitions and make them explicit. A finite-state machine (FSM) is the computational model that formalizes this idea.

The FSM can be in exactly one of a finite number of states at any given time. It can change from one state to another in response to external inputs; such change is called a transition [1].

The UI FSM will manage the state of a view and handle user inputs via a state-transitioning function that may include additional side-effects. A state machine is fully defined in terms of its [2]:

In this article, we’ll be using the CombineFeedback library that lends itself to designing reactive state machines. With CombineFeedback, the structure of the app components looks next:

Let’s describe the core components of the above figure.

State represents the state of your finite-state machine.

Event describes what has happened in a system.

Reduce specifies how the state changes in response to an event.

Feedback is the extension point between the code that generates events and the code that reduces events into a new state. All your side effects will sit in here. Feedback allows us to separate side effects from the pure structure of the state machine itself (see it in green).

The snippet below is based on the implementation from RxFeedback.

Feedback produces a stream of events in response to state changes. It allows us to perform side effects, like IO, between the moments when an event has been sent, and when it reaches the reduce function:

The snippet below is based on the implementation from CombineFeedback.

Finally, let’s discover how to put everything together.

Building an App with MVVM

To follow the code samples you’ll need some basic knowledge of the SwiftUI and Combine frameworks. Getting Started with Combine and Apple SwiftUI tutorials will get you up to speed.

Let’s explore the MVVM iOS app architecture by building a movie app from scratch. Here is how the final result will look:

The app has two screens:

We begin with the movies list. Before writing any code, we must design the state machine:

Based on the figure, it’s trivial to represent a list of states and events in code. I prefer declaring them as inner types of a view model:

Note that MoviesListViewModel implements the ObservableObject protocol. This allows us to bind a view to the view model. SwiftUI will automatically update the view whenever the view model updates its state.

Some of the states have associated values in order to draw them on the UI or to pass to the next state. Similarly, events carry data, which is the only source of information when we produce a new state inside a reduce() function.

Now we can implement a reduce() function that defines all possible state-to-state transitions:

On the state machine figure, you can see all the events except for onSelectMovie. The reason for that is because onSelectMovie is sent as a result of user interaction with an app. User input is a side effect that needs to be handled inside feedback:

Then we initialize the state machine using the system operator:

The two pieces that are missing are the whenLoading() feedback and the ListItem type. Both of them are related to loading movies from the network.

When the system enters the loading state, we initiate a network request:

Here is what we are doing:

The network client talks to TMDB API in order to fetch trending movies. I am skipping some implementation details to keep focus on the main subject:

You can learn how to build a promise-based networking layer with Combine here.

The DTO suffix means that we are using the Domain Transfer Object pattern.

ListItem is a mapping of MovieDTO for the purpose of presentation:

After designing the view model, now we can start with the implementation of the view.

First, bind the view to the view model state updates by means of the @ObservedObject property wrapper:

Next, in the body, we want to send a lifecycle event to the view model:

Here how the list(of:) method is implemented:

MovieDetailView represents details of a movie. If a user taps a list row, it will be pushed onto the navigation stack. MovieDetailView is initialized with a view model, which, in its turn, accepts a movie identifier.

MovieListItemView represents a list row. Note that it accepts a view model of type MoviesListViewModel.ListItem rather than MovieDTO. It is important not to mix the infrastructure details, i.e. MovieDTO, with the presentation, i.e. the view models. I am skipping the implementation of MovieListItemView since it is not directly relevant to our subject.

Movie details state machine is identical as compared with that of the list of trending movies:

Here is how we represent the movie details state machine in code:

In order to pass user events, we create a userInput feedback:

Next, we declare one more feedback that fires a network request:

Then we initialize the state machine:

Now we can implement a view:

You can find the final project here. It is published under the “Unlicense”, which allows you to do whatever you want with it.

Learn how to manage a keyboard when it covers a text field in SwiftUI.

Learn how to download a SwiftUI image asynchronously from a URL and display it in a list.

Yet Another Swift Blog
—
Modern MVVM iOS App Architecture with Combine and SwiftUI
Love the post? Share it!